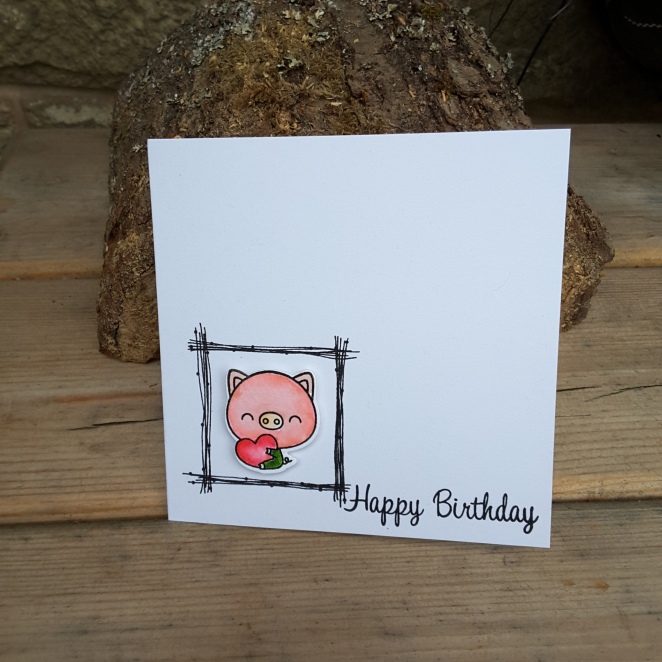 Hello there. I hope everyone is doing alright, and hoping to get some crafting done over the next few days.

This card is made to enter the current challenges at CASology. The cue word is ‘farm’.

I don’t have many farm animal stamps,  but I remember purchasing this Mama Elephant ‘Lovely Piggies‘ stamp set a little while ago. I thought it would be easier to colour than the ‘Little Agenda‘ stamps I have – very fiddly they are – and it was better. Well, the heads were, anyway!

I stamped all the images onto water-colour card stock with Versafine Black Onyx, as I didn’t know how I wanted to colour them. I then heat embossed in clear, and looked at all my colouring options.

I decided to go with my Zigs, as I hadn’t used them for a while, and the tip of the brush means I can get into the fiddly areas when I needed to.

I used a couple of pinks for the pigs, and then played with the other colours for whatever the pigs were holding or wearing. I chose this little piggy as I like the little heart he/she is carrying. I die cut the piggies, and then looked to my layout.

How I could frame the little piggy? I remembered I had bought some square frame stamps last week at the Doncaster Dome craft show. There are two square stamps from Bee Crafty ‘Backdrop Frames – style wire‘ and I chose the larger of the two, stamped in Versafine black onyx again, and sat my little piggy inside it.

The sentiment is from a Honey Doo stamp set ‘Forget Me Not‘ which I also bought last week.

So, quite a clean and simple card for you today, but it actually took me longer than my more elaborate concoctions, because of the colouring, and the decision of where to place everything.

A last little bit of exciting news…..I have been asked to guest design for the next CASology challenge, beginning Tuesday 12th June……it’s another good ‘un………I hope you will be able to join us.