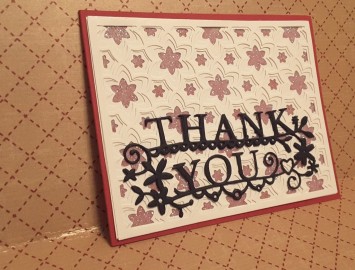 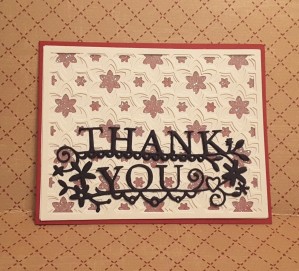 The card I have made today is to enter the Simon Says Stamp Wednesday challenge, theme being using more than one die cut or punch and Clean and Simple on Sunday with the theme of using a sentiment, but no image. I decided to go back to my wonderful Birch Press ‘Sevilla’ layering dies, and added a sentiment I have had for a few years – the lovely ‘Thank You Extravaganza’ from Memory Box. Such a wonderfully ornate sentiment die.

I started by putting some ‘Wonder Sheet’ double sided sticky paper (Be Creative) on the back of three white pieces of card. I then cut the three layers from the Birch Press die out, and stacked them on top of each other. I still think the best way to add these layers is by using double sided sticky sheets, as I found that the Crafters Companion sticky spray wasn’t – sticky, that is. It didn’t stay stuck down on previous cards, and was so disappointing.

I then put some double sided sticky sheet on another piece of card the same size as the die cuts, and – once I added the base die cut to it – sprinkled on some Cosmic Shimmer sparkles. I am not sure whether the Sevilla die is supposed to be flowers or stars, but feel that in this case they are stars – and need a little sparkle. Just a touch…….

I then die cut the sentiment twice from black card which also had the double sided sticky tape on it – the best way to layer……but watch out for it sticking in the wrong place to the wrong thing! I did one sample and it stuck completely cock-eyed.

I wanted the sentiment to be quite bold, and for it to stand out from the layered base, which is why I cut it out in black. I didn’t think a colour would be as vivid, and didn’t want to cover the background with a tag that size. I added some glue in strategic places, to support the lacy sentiment.

Even though there are several layers, I still feel the look of the card is quite simple, and it didn’t take long to make it at all. A little bit of fun after my workday.