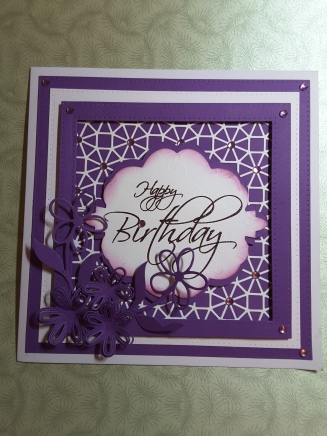 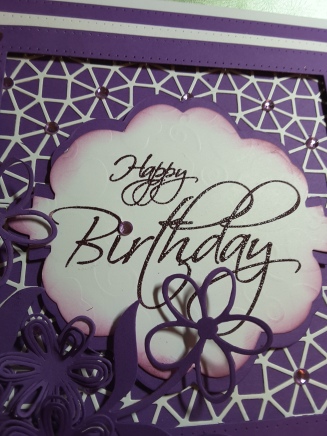 Here I have made a card for my best friend’s birthday. Her favourite colour is green…..so….I made it in purple!! (I am sure there is some psychology in there somewhere!)

I am having a purple phase, and loving using the Creative Expressions range of card, with many of their packages being tone on tone, varying degrees of the same colour.

The card is a base of 8 inches square, with several layers on top, and a square frame placed and raised over the main centre segment. The squares are from Tattered Lace, and have a stitched effect around the edges, which I think add a great small detail to each layer. I used two of the sizes together to create the raised purple frame, adding sticky foam to the back of it.

The centre white is a ‘Spellbinders’ Geo die – two cut and stuck together for the background. The stamp is a large ‘Honey Doo’ stamp, stamped in purple and with clear embossing powder added for extra shine and dimension. A Creative expressions/Sue Wilson die for stamping the main sentiment on, and cutting two of the same in purple, cutting them in half, and shadowing the main white one. I inked around the edges slightly and adds some extra interest, as I thought the white was a little too ‘white’.

The two daisy’s and scribble flowers again from Sue Wilson/Creative Expressions for some interest in the bottom corner, with 3D glue so I had time to place them where I wanted them. I like that they are not solid, and I leave the top part of the daisy unstuck, to create some movement. I also added some jewels which were purple and glittery, though I had to stop myself adding more……..a girl needs some sparkle!

All-in-all another card I am pleased with, and I hope my friend feels the same. Definitely gone back to my two colour Sue Wilson cards on this one. 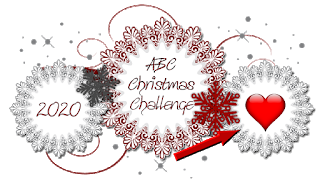 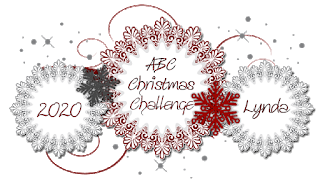