Hello again. I’ve had a busy few days……mum has decided not to craft again 😦 and so she wants me to sell all her stuff on Ebay. When I say all her stuff…..I mean absolutely everything. There is a lot of stuff, and many of them haven’t even been opened or used. It reminds me to use my own stash!

Over 500 photos later, and I still haven’t scratched the surface…..guess what I’m going to be doing for the next few months….

I did manage to find time to craft today, and even played around a little.

This first card is for the current challenge at Color Throwdown, to use the colours aqua, peach, light grey, and white:

I played around with these colours for a few stamping moments. I tried several variations on the theme, but still using the same Altenew ‘Build a flower: Cattleya‘ stamp and die set.

This card was doing a sort of fast water-colouring – as per Jennifer McGuire – using Catherine Pooler ‘Aquatini‘ ink – one of my all-time favourite colours, after heat embossing with clear embossing powder on white water-colour card.

I then took a piece of water-colour card and added some Altenew grey ink –  I forget which one – and did a smooshing technique – wet water-colour card onto the wet ink. I did the smooshing several times, drying between each layer – I didn’t know until I tried this that the Altenew inks layer quite nicely.

I then used the Altenew ‘Leaf Frame Cover Die‘, die cut it, but left all the pieces in. I didn’t mean to do this, but when I took the die off the card, they all stayed put – so I went with it instead of pressing each piece out.

I stuck and layered as you see, and the sentiment is stamped in Stampin Up ‘Peekaboo Peach‘ – though it actually looks quite orange to me here…..supposed to be peach!

I had a play making some other variations: 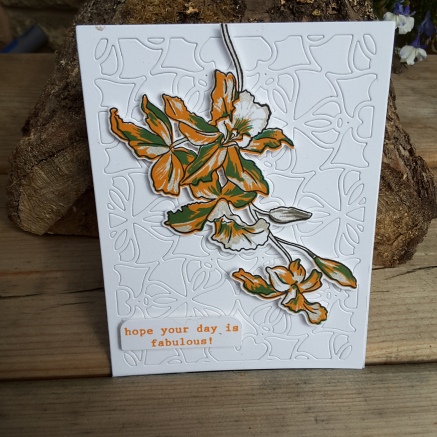 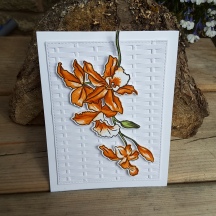 The first image is using the three colours and the layering stamps – grey for the base, then the peach, then the Aquatini – kinda liking that look and effect. The top right is using the Peekaboo Peach for each layer, giving a little dimension, and the third card I used my Altenew Artist Markers to add more definition once stamped.

I used Altenew Artist Markers and scribbled onto some Neenah card, then die-cut the butterfly itself, then took a spare piece of the grey water-colour card and die cut the butterfly outline. I only stuck down the middle of the butterfly, so the wings have dimension:

I then embossed the MFT ‘Rectangle Peekaboo Window’ die onto the card base – not cutting, just embossing – and stuck my butterfly down. Hey presto! Sounds easy…..but it took me a while to figure out what to do!

The sentiment is cobbled together from Altenew ‘Folksy Florals’ stamp set. There is a great variety of sentiments with that stamp set, and you can make virtually any kind of sentiment for anyone.

Phew – this turned out to be a longer post than I planned – you let me waffle on a bit – so I did!

Have a good one – catch you later.

6 thoughts on “Butterfly and flowers”