Hello again. I have made variations of colours with this card layout, using a couple of recent purchases.

The card was inspired by the current challenge from Inspired By All The Little Things, using their photo inspiration.

I used the Memory Box ‘Toulouse Background‘ die, which I think matches the florals in the photograph, and I cut it out of a range of water-coloured card I had been using my Brushos and Distress Oxides on. I must say my fingers were definitely multi-coloured once I had finished playing!

The floral die was stuck down onto the Altenew ‘Water-colour Stripes Cover Die’ which I kept white for a more subtle background to the floral image. I initially stuck it down with Crafters Companion spray adhesive – again I am disappointed in that spray. The floral image came away from the background yet again, so much so that I could peel it away and run it through my Xyron machine for a more permanent adhesive. I think I’ll call into my local Crafters Companion shop to see if I am doing anything wrong!

Here are the other cards I made along the same theme: 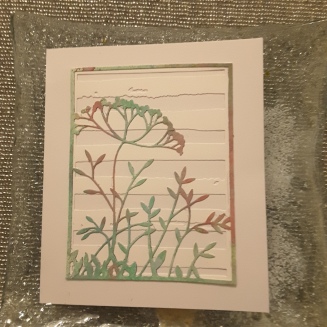 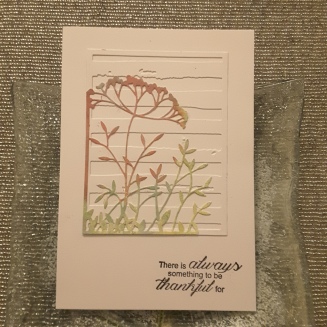 The sentiments are all from Stamps By Me, using Versafine black onyx. The variations in the cards and the die cut-out are my me removing part of the frame just to see what effect it gives. I do like to snip my die-cuts occasionally.

Even though this looks quite a simple card to put together, it did take some faffing around with the glue, and re-gluing – annoying! Gotta love the Xyron!